Swamped officials, back-logged visa requests, mountains of lifesaving supplies and throngs of people with nowhere to go - in the face of disaster, most airports look very much alike. And especially for humanitarian relief workers, scenes of chaos and mayhem are all too familiar.

Whether it's after Typhoon Haiyan in the Philippines or the recent massive twin earthquakes in Nepal, airports often become vital hubs where terrified people seek a passage out and where incoming aid is coordinated and distributed. More often than not however, the high volume of relief goods and personnel, combined with the overall burden of the disaster, are more than many airports are equipped to handle.

Chris Weeks, DHL’s Director of Humanitarian Operations, knows this all too well. Weeks was in Haiti just days after the devastating 2010 earthquake as part of relief efforts and witnessed the bottlenecks an unprepared airport can incur. “There was a great deal of confusion,” he says, “the small central airport was not equipped to handle the thousands of people and mass quantities of incoming goods. Because of damage to the airport itself, some flights had to be diverted to the nearby Dominican Republic. There was no-one to coordinate this unprecedented flow of people and supplies. As a result, assistance was slower than it needed to be in getting to those affected.”

Deutsche Post DHL (DPDHL), experts in logistics, including road, sea and airfreight, have partnered with the United Nations Development Programme (UNDP) to make post-disaster airport scenes less chaotic - and airport staff better prepared to facilitate relief. Having now worked in 29 airports to better prepare for disasters, the GARD team was in Macedonia in April 2015, to train airport officials and staff from the Ministry of Transport and Communication in airport disaster readiness. The Get Airports Ready for Disaster programme is preparing airport workers for the worst and teaching them to cope with potential surges in air traffic – making aid delivery faster and more efficient. The programme is implemented by the Geneva hub of UNDP’s Climate Change and DRR Team.

“In my experience, most airports in high-risk areas are not prepared for a surge in air traffic after a natural disaster,” Weeks says. “Often the management doesn’t appreciate that handling many unscheduled cargo flights can quickly disrupt regular airport operations. Combine that with a lack of staff and equipment and you can see the predicament.”

To monitor the progress of implementation activities post the GARD programme, UNDP and DPDHL group have developed a refresher concept, GARD Plus to foster a sustainable approach. As part of GARD plus, action measures identified during the course of the initial GARD workshop are reviewed after a period of six to twelve months. The first GARD plus workshop took place in Beirut, Lebanon in December 2012. Participants there had created a GARD committee with the goal of integrating all of the input from the GARD workshop into Lebanon's disaster management program.

GARD training programme was followed by a GARD Plus programme in Armenia in 2014. The training has particular significance in Armenia, which last year marked the 25th anniversary of the devastating Spitak Earthquake that killed an estimated 25,000 people and destroyed much of the country's infrastructure. Since then, disaster risk management has been a strong focus for the government.

In partnership with UNDP, the national disaster management system has shifted its focus from disaster response to include risk reduction, establishing both a National Strategy and a National Platform on disaster risk reduction. Additionally, the Ministry of Emergency Situations set up a crisis management state academy to train government staff in disaster management, firefighting, rescue and safer engineering. The ultimate goal of these and other actions, says Bradley Busetto, the United Nations Resident Coordinator in Armenia, is that disaster risk is considered and integrated into any planned policy, or action by the state – including development and poverty eradication.

“Armenia has become a regional leader in disaster risk reduction, recognizing it as a precondition of sustainable development,” says Busetto. “In recent years the government has accepted the need to invest in disaster preparedness and incorporate it into everything it does, including new laws, rules and regulations that come into effect.”

At Yerevan’s Zvartnots airport Weeks walks through each area, from baggage claim to the VIP lounge, with a large contingent of workshop participants. Along the way he asks them the pointed questions: can the runway support large planes and traffic? Are there sufficient bridges to connect to planes and, if not, are there buses? Are there lengthy visa and arrival restrictions that can be waived?

“This programme is all about identifying bottlenecks to the delivery of aid and fixing them,” says Neil Buhne, Director of UNDP’s Geneva office. “We want to make people pause and ask themselves what the system is lacking and where they can improve it by devising practical contingency plans.”

In addition to Armenia, DPDHL and UNDP have helped prepare airport staff in other disaster-prone countries including Bangladesh, Dominican Republic, El Salvador, Jordan, Lebanon, Macedonia, Nepal, Panama, Peru, the Philippines, Sri Lanka and Turkey, training more than 500 people in 29 airports. The Get Airports Ready for Disaster training course is part of the GoHelp Program of Deutsche Post DHL. No stranger to disaster management around the globe, DPDHL maintains Disaster Response Teams who provide logistics support, such as unloading cargo planes and warehousing relief supplies, when requested by the United Nations following a disaster.

For further information on the Get Airports Ready for Disaster workshop, please contact: 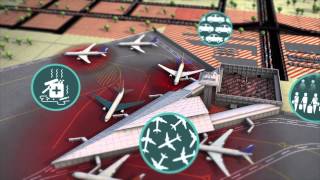